flydubai, Dubai’s innovative airline, today spoke of its success story, highlighting the airline’s achievements since its launch and the increasingly prominent role it is playing in Dubai’s aviation sector.

The airline paid tribute to the vision and support of the Government of Dubai, recognising its investment in infrastructure and tourism as well as its commitment to developing Dubai’s aviation sector, which is expected to contribute approximately $45 billion in revenues to the emirate’s GDP by 2020[1].

Since operations began in June 2009, flydubai has experienced unrivalled growth. In the past two years it has more than doubled the number of destinations it flies to, from 25 to 52, a rate of more than one new destination per month and has increased its weekly flights to more than 1,000. flydubai has carried 10.4 million passengers since its launch and has become the second largest carrier, by passenger numbers, operating out of Dubai International.

His Highness Sheikh Ahmed bin Saeed Al Maktoum, Chairman of flydubai, commented: “The vision and commitment of the Government has transformed Dubai into a global centre for aviation, trade and tourism. Launched to support Dubai’s thriving commercial and tourism sectors, flydubai’s ambition and success embody the spirit of the city it represents. In its short history, flydubai has firmly established its place in the region. It has opened up new markets, contributed to increased tourism in Dubai and made a major contribution to the growth and connectivity of Dubai’s aviation hub. Today, I am proud to celebrate the success of this young, ambitious airline and its positive impact on the UAE.”

Commenting on flydubai’s performance, Chief Executive Officer, Ghaith Al Ghaith said: “When we launched in 2009, our objective was to make air travel more accessible and offer real value for passengers. We quickly identified and capitalised on opportunities offered by our proximity to the world’s centres of population in Europe, the Middle East, North Africa and Asia, facilitating trade and tourism with the opening of new and underserved routes. We also challenged the conventional low-cost carrier approach, offering our passengers added-value services at affordable prices.

“The success of our sustainable business model is evident in our financial and operating performance. We moved into the black for the second half of 2011, delivering three consecutive semi-annual periods of profitable growth.

“In 2012, we carried 5.1 million passengers and with the addition of the Ha’il route in Saudi Arabia starting today, we have a network of 52 destinations served by a fleet of 28 aircraft.”

In spite of an operating environment characterised by economic uncertainty and consistently high fuel prices, total revenue for flydubai in 2012 was AED 2,778 million (USD 756 million),  a strong demonstration of the airline’s growth story to date. Net profit for the year was AED 151.9 million (USD 41.4 million) and flydubai saw a steady upward trend in EBITDAR[2], reaching 24 per cent of revenue for 2012, an excellent achievement in just over three years of operations and a good indicator of the financial health of the business.

flydubai’s commitment to enhancing the on board experience of its passengers is demonstrated in its ancillary revenues which accounted for 16.5 per cent of total revenues in 2012. Ancillary revenues will continue to be a significant component of total revenues in line with the growing popularity of flydubai’s added-value services, which include in-flight entertainment, seat preferences, checked baggage allowances, car rental, travel insurance, cargo and visa facilitation services.

The airline’s financing partners have believed in flydubai’s growth potential from the beginning of its journey. The market’s ongoing confidence in flydubai’s credit story is reflected in the AED 4.5 billion (USD 1.2 billion) competitive financing raised from the market to fund the acquisition of its aircraft fleet to-date, enabling the airline to order 50 aircraft before its first flight. Of the remaining aircraft deliveries, flydubai has recently mandated nine deliveries for sale and leaseback financing, which attracted strong interest with bids received for more than five times the requirement.

At the core of flydubai’s proposition is the ability to meet the varying needs of its business and tourism passengers with connectivity and an affordable, reliable service. Since June 2009, it has experienced phenomenal growth in passenger numbers. The airline carried 5.1 million passengers in 2012, with 10.4 million passengers overall.

The airline has increased accessibility to and from Dubai, launching 31 routes that either did not previously have direct links with Dubai or were not served by an UAE national carrier from Dubai. Among the nine new destinations launched in 2012 were Baghdad, Bucharest, Sana’a and Taif.

flydubai has one of the youngest fleets in the world. It chose the Boeing 737-800 for its suitability to high frequency traffic within its geographic reach; the aircraft is quiet, reliable, has a strong safety record, and impressive fuel efficiency. The airline will receive the full order of 50 new Boeing 737-800 aircraft by 2016.

Promising outlook for 2013 and beyond

flydubai has a committed leadership, sustainable business model and a well-defined strategy for growth. Six new aircraft will be delivered in 2013 to meet demand on busy routes and enable the airline to reach new destinations. Since the beginning of the year two new routes: Malé in the Maldives and Ha’il in Saudi Arabia have joined flydubai’s network.  Multan and Sialkot in Pakistan will commence in March.

With projections for strong GDP growth in the UAE, Dubai’s position as the centre for aviation, trade and tourism in the Middle East and the Government’s continued investment in the quality of Dubai’s airports and airlines; flydubai is confident that the outlook is promising for 2013 and beyond.

[2] EBITDAR is calculated as earnings before interest, taxes, depreciation, amortisation and rental costs 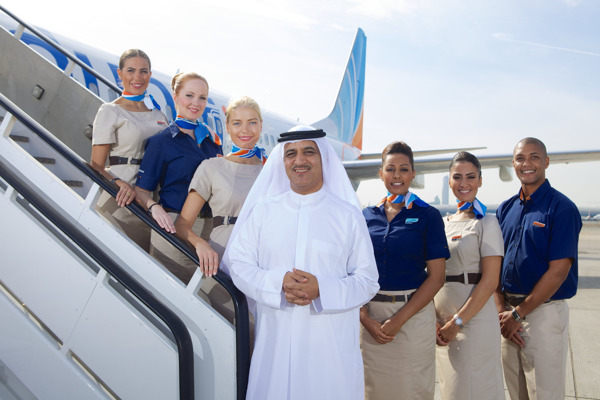