Commenting on the new video, Ghaith Al Ghaith, Chief Executive Officer of flydubai, said: “The original film was truly innovative, using the animated FREEJ cartoon characters to convey important safety information. In the past year we have unveiled our new crew uniform and welcomed the Boeing 737 MAX 8 to our fleet with its enhanced Business Class and Economy Class cabins. Our updated safety video reflects these developments while staying true to the original concept and reflecting the flydubai brand and personality. We are pleased to continue our collaboration with FREEJ, another young brand which proudly promotes Dubai and the UAE’s heritage.”

The video sees flydubai cabin crew member Maya carrying out the pre-flight safety demonstration to passengers including the four Emirati grandmothers from the FREEJ series. FREEJ creator Mohammed Saeed Harib produced the update. He said: “There’s a nice synergy between the FREEJ characters and the flydubai brand. The original safety video was a huge success and I think a lot of international passengers identified with these characters. Technology has evolved since then – we have better animation and flydubai’s Boeing 737 MAX 8 aircraft have better screens – so it was a good opportunity to update this fun video with fresh content and improved graphics.”

Prior to launching the new video, flydubai took their social media fans on a behind-the-scenes journey in a series of Instagram and Facebook posts throughout the week. The film’s star, Cabin Crew member, Maya, was seen visiting the FREEJ studios and taking delivery of the film from the FREEJ characters and their creator Mohammed Saeed Harib. She was next seen onboard one of the airline’s Boeing 737 MAX 8 aircraft handing the film to a flydubai Cabin Crew member, ready to be shown to passengers before every flight. 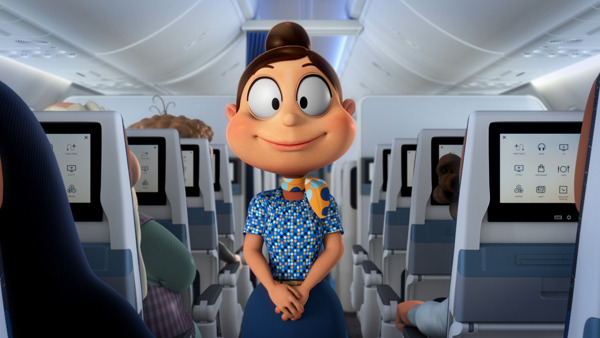