Statements on the Annual Results

Commenting on the announcement of the airline’s Full-Year Results for 2017, His Highness Sheikh Ahmed bin Saeed Al Maktoum, Chairman of flydubai, said: “the Results announced today demonstrate the key role that flydubai continues to play in the development of trade and tourism in the UAE.  2017 also saw flydubai place its third and largest aircraft order illustrating its contribution to Dubai as a centre of aviation and represents the scale of the ambition planned for the airline.”

Commenting on the expanded codeshare announced last year, His Highness Sheikh Ahmed bin Saeed Al Maktoum, said: “in its early stages, the partnership with Emirates has enjoyed a significant response from passengers who recognise the benefits of travelling around the world on a single ticket.  As the opportunities presented by the codeshare progress it will create new passenger flows going forward.”

Ghaith Al Ghaith, Chief Executive Officer of flydubai, commenting on the financial and operational performance of the airline, said: “the oil price continues to shape the business landscape and it remains a fine balance between fares, yields and passenger growth.  Despite the socio-economic environment we have seen across our network, we have record numbers of passengers travelling with us as well as sustained growth in our revenue.”

Looking to the year ahead, Al Ghaith, added: “the introduction of new and more fuel efficient aircraft into our fleet will be a positive influence and we will see greater benefit as more Boeing 737 MAX 8 aircraft join the fleet.  We know how important aviation is to the business landscape and we remain confident about the road ahead.”

Arbind Kumar, Senior Vice President, Finance of flydubai, said: “our persistent and rigorous approach to cost management continues to ensure that the business remains robust to support our sustainable growth over the next few years.”

flydubai Cargo supporting trade links: in an airfreight market that remained challenging with fast-changing demand patterns flydubai Cargo became the first airline to use blockchain technology in the airfreight industry.  In addition, the airline continues to only use electronic Air Waybill (e-AWB).

Looking ahead, flydubai has announced the launch of 10 routes which will start operations during the first six months of 2018 and will further enhance connectivity across its network.

The airline will take delivery of seven aircraft during the course of the year.  In line with its strategy to maintain a young and efficient fleet, these aircraft will support flydubai’s continued growth as well as replace four aircraft in the fleet which will be retired.  Positive feedback has been received by customers following the introduction of the Boeing 737 MAX 8 aircraft into the fleet.  The airline will take delivery of its first Boeing 737 MAX 9 aircraft.  These aircraft will bring more efficiencies to the fleet as they become available on more routes.

Although the operational climate has remained challenging, flydubai is cautiously optimistic about 2018. Furthermore, its partnership with Emirates, which has already been well received by passengers, will create additional opportunities.  Its strategy to open up previously underserved routes, the creation of new direct airlinks, its efficient and flexible business model will ensure flydubai is best positioned for the year ahead.

[1] EBITDAR is calculated as earnings before interest, taxes, depreciation, amortisation and rental costs 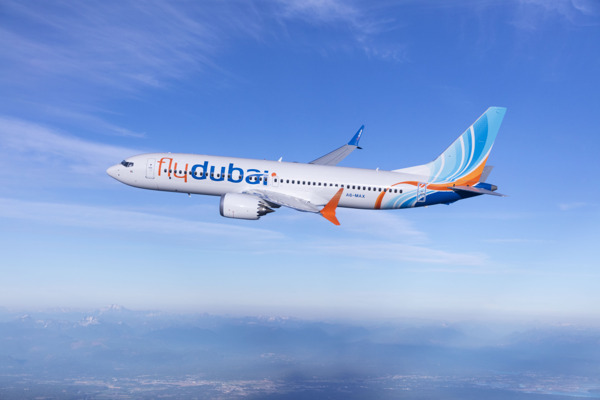 From its home in Dubai, flydubai has created a network of more than 95 destinations served by a fleet of 63 aircraft. Since commencing operations in June 2009, flydubai has been committed to removing barriers to travel, creating free flows of trade and tourism and enhancing connectivity between different cultures across its ever-expanding network.

An expanding network: Created a network of more than 95 destinations in 50 countries across Africa, Central Asia, the Caucasus, Central and South-East Europe, the GCC and the Middle East, and the Indian Subcontinent.
Serving underserved markets: Opened more than 70 new routes that did not previously have direct air links to Dubai or were not served by a UAE national carrier from Dubai.
An efficient single fleet-type: Operates a single fleet-type of 63 Boeing 737 aircraft and includes: 34 Next-Generation Boeing 737-800, 26 Boeing 737 MAX 8 and 3 Boeing 737 MAX 9 aircraft.
Enhancing connectivity: Carried more than 80 million passengers since it began operations in 2009.